In early 1940, as the struggle to evacuate troops from Dunkirk was coming to an end, attention turned to the possibility that enemy forces would follow the rout with an invasion. Among the steps being taken to build covert gun emplacements, tank traps and other means of slowing down an invading army, worries arose about the help to an enemy presented by informative road signs of various sorts.

Having left his creation the BBC two years before, Sir John (later Lord) Reith was appointed Minister of Information in January 1940 in Chamberlain’s wartime government, and it fell to him to issue the order to remove or deface milestones, mileposts, fingerposts and the like.

Even at a time of national emergency there were those who regretted the loss of historical and irreplaceable roadside artefacts, as the cuttings below from the Yorkshire Post and Leeds Mercury of June 1940 testify.

Surviving mile markers from the Turnpike era are thin on the ground across Warwickshire, and it is probable that being a likely target for its industry and wartime manufacturing many markers were removed or damaged at this time. 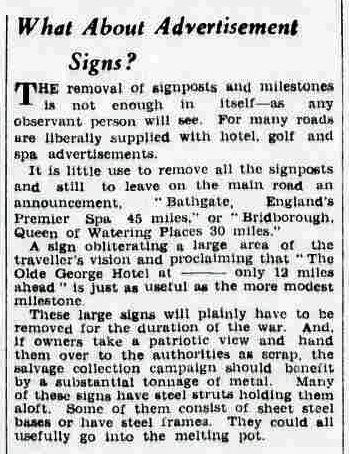